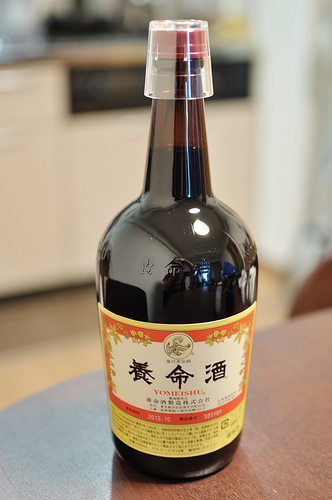 I’d never really heard of Yomeishu until I started seeing some very interesting campaign ads flickering at the edge of the websites that I frequent.

Yomeishu is a Japanese medicinal-use nutrition drink. The tonic includes fourteen “natural remedies”, one of which is turmeric. The official Yomeishu website states that this tonic can battle tiredness, digestion problems, loss of appetite, among many other minor ailments. Now, in winter, they are most actively advertising the drinks effectiveness against coldness in the extremities. This may explain their newest campaign…

As part of the new campaign, which runs from November 7, 2013, to January 30, 2014, Yomeishu is going to give away fifty sets of the Yomeishu-shaped body pillows. Yomeishu did a similar campaign last year, but this year’s pillows look even fluffier!

I really wanted to enter, but the pillow set, which is a jumbo Yomeishu pillow and mini Yomeishu pillow, seems to be aimed at a parent and child pair. I need to find a kid, stat.

The Yomeishu website states that the tonic-shaped pillows are “just the right size” and that the “oh-so-fluffy filling will make you want to hug it 200% [more than regular pillows].” The pillows even have pockets to warm your hands in!

Like I said before, I don’t drink Yomeishu, but I am intrigued by this pillow.

Many of the reactions on the internet, however, were mixed. Below are a few of the Japanese comments on the Yomeishu pillow translated into English.

Yomeishu is doing a new campaign with a giant body pillow… Is there anyone who would really want that? [Twitter]

I have a weakness for novelty goods like this… [livedoor blog]

Finally, a bottle I can hurl at someone as hard as I want. [Twitter]

The jumbo Yomeishu pillow — I don’t understand it, but I want it. [Twitter]

The person who made this advertisement seems like they were probably tired. Drink some Yomeishu and rest. [Twitter, via blog]

I want this pillow. I want to hold it by the bottle’s neck, swing it around, and attack someone with it under the cover of darkness. [Twitter]

While looking for comments on the Yomeishu pillow, I found this very odd gif animation on the Yomeishu 2013 campaign official Twitter account. I suppose rolling the pillows on top of each other is supposed to display their hugability.

On the topic of moving-pictures related to Yomeishu, the Japanese YouTube comedian Koji Seto made this (very unofficial) rap about the Yomeishu pillow campaign.

Also, here’s a video from someone who got the pillow last year. Maybe a winner from this year will make a video when they receive their pillows?

The best news is that you don’t even have to buy Yomeishu to enter to win the Yomeishu pillow. Just answering a quiz on the website will do. I wonder if having a kid is really necessary? Having two Yomeishu-shaped body pillows to hug at night would be doubly great.