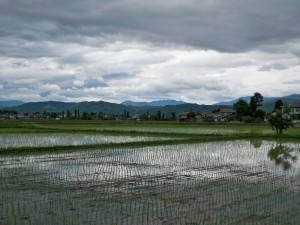 My favorite photo from WWOOFing in Nagano.

Things are getting hot here in Tokyo. One of these days it will be fall.

In the mean time, I’m trying to keep my mind off the heat by answering some messages that have been sitting in my inbox for a shamefully long time.

Back in university, I volunteered in Japan with a program called “WWOOF Japan.” WWOOF stands for “Willing Workers on Organic Farms.” WWOOF is an an organization that connects organic farmers and hosts to volunteers.

I mentioned WWOOF Japan a while back on a post about free places to stay in Japan. The basic gist is that, after paying a one-time low-cost membership fee, you volunteer on a farm (or other organic institution) in exchange for lodging and food. WWOOFing is a great way to meet like-minded people. You can learn a lot about farming and Japan and save some money on travel.

Then, a few weeks ago, I received a Facebook message from a friend asking some questions about WWOOF Japan. Since many people seem to be interested in learning more about WWOOF, I decided I would post my reply to that message on this blog. There are some minor changes and better formatting to make it easier to understand.

My experience with WWOOF Japan

Visa for WWOOFing in Japan

For Japan, as long as you aren’t working for compensation, you don’t need a special visa. I just used my standard 3-month tourist visa (“temporary visitor visa” automatically given to US citizens) when I WWOOFed. Of course, lodging and food could count as compensation. However, the WWOOF Japan website states that the program has nothing to do with money or employment. When asked by Narita immigration what my purpose in Japan was, I replied something along the lines of cultural exchange/home-stay/volunteer. I had no problems.

I chose the places I wanted to work based on area, type of work, and whether they had cats (I’m allergic). I wanted somewhere close to Narita first. Then, I wanted a host close to the language school I would attend near Nagoya after WWOOFing. Actually, I messed up a little bit and ended up WWOOFing in Nagano instead of Nagoya. Actually, Nagano is extremely beautiful, so no regrets.

There are a ton of different types of WWOOF Japan hosts. In Ibaraki, I stayed at a family’s place that ran an English school and had some gardens. Then, in Nagano, I stayed at an fruit orchard/rice farm. Both had me doing tasks for about six hours a day. I had one rest day per week. Helping with the English school was fun. I will admit that the farming, though, was tough at times. Still, I anticipated this. If you read the hosts’ profiles carefully to see what they expect, you should be fine. The profiles list the time commitment per day and what kind of work you’ll be doing. You can also message the host directly before visiting.

In Japan, there are hosts that run traditional farms, nature centers, English schools, onsens/hotels/ryokan, patisseries, and so on. I’ve heard stories about hosts who required only about two hours a day, but also ones who expected more than six hours a day. It really depends on the host.

I hope this answered some of your questions! Let me know if you have anything else you are interested in knowing.

I definitely plan on writing a proper post about WWOOF Japan in the future, so keep an eye out.
If you have any questions, feel free to ask!