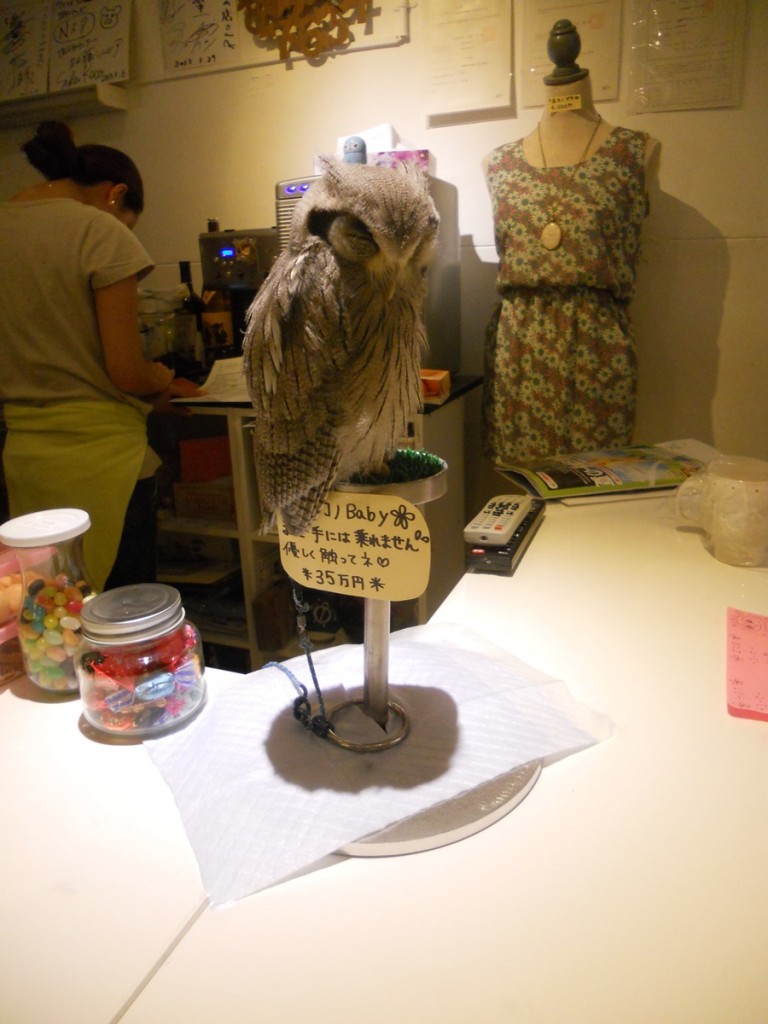 The owl cafe Fukuro no Mise in Tokyo is crowded even on the weekdays, despite its tucked away location. Down a side street across from Tsukishima Station, the owl cafe is given away by the owl curtains and the people milling around, waiting to get in. I couldn’t believe my luck that I lived close enough to bike not only to Tori no Iru Cafe (a bird cafe), but also to this owl cafe!

According to Nikkei, Fukuro no Mise was opened in October 2012 as a way for the owner, Mr. Ishikawa, to share his passion while also making a living. He used to walk around town with his pet owl, and the excited reactions of those around him gave him the idea to open an owl cafe. His idea has proven very popular, as evidenced by the difficulty in getting a spot at the cafe.

Entry into the owl cafe goes by a system where the day is broken up into several one-hour time slots. Only a set number of people are allowed to enter for that hour. The “exclusiveness” makes the shop even more enticing. In addition, you can’t make reservations to the owl cafe in advance; you have to show up and hope that there are some spots open.

After being turned away no less than two times, there was finally a spot in the last time slot of the evening. 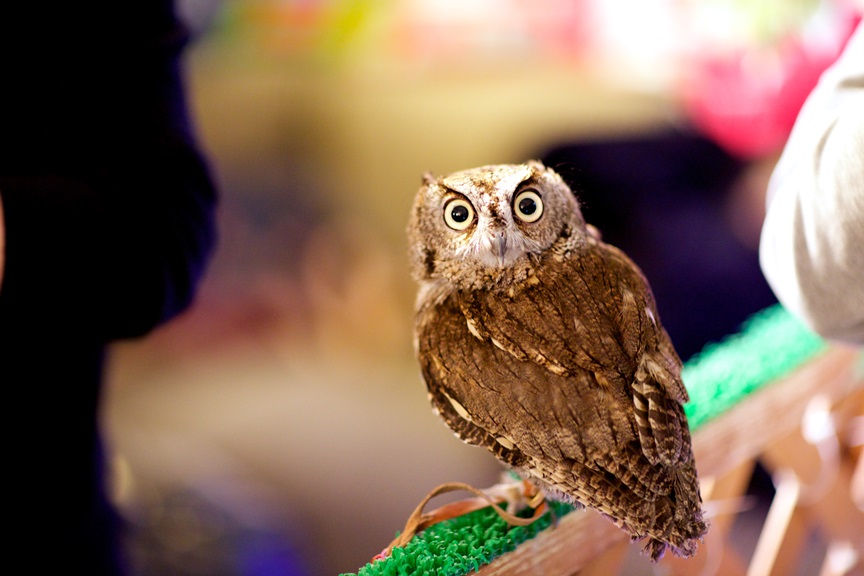 Upon entering the owl cafe with others in your time slot, which lasts about an hour, you are greeted by many large round avian eyes and plenty of owl figurines. In fact, at first, the real owls are difficult to distinguish from the toys. 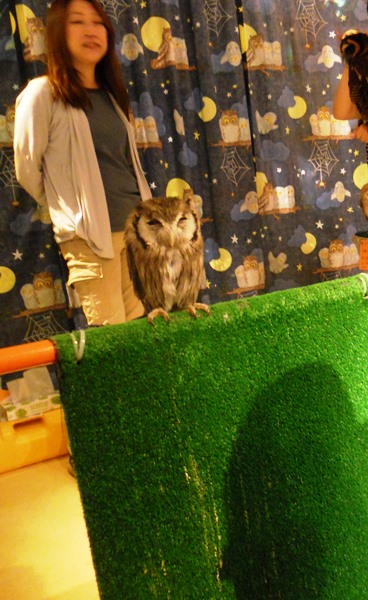 Sleepy small owl. I think he was annoyed I was trying to take a photo with him.

Before mingling with the owls, you are asked to sit down and order a drink. Small snacks are freely available, but everyone has to order at least one drink. Most of the drinks cost 1000 yen (Jan. 21, 2015: Apparently the cost has gone up to 2,200 a drink!), which seemed a bit expensive. I thought of it as a sort of a cover charge to make myself feel better about a milk tea that costs almost as much as I make an hour.

Once you’ve gotten your drink, the rules of the cafe are explained to you. No flash photos. Don’t pick up the baby owls. No, you can’t take any of the owls home (unless you pay the 100,000 yen (~1000USD) or more they’re going for). Et cetera. Listen closely – getting kicked out of an owl cafe would be pretty depressing. 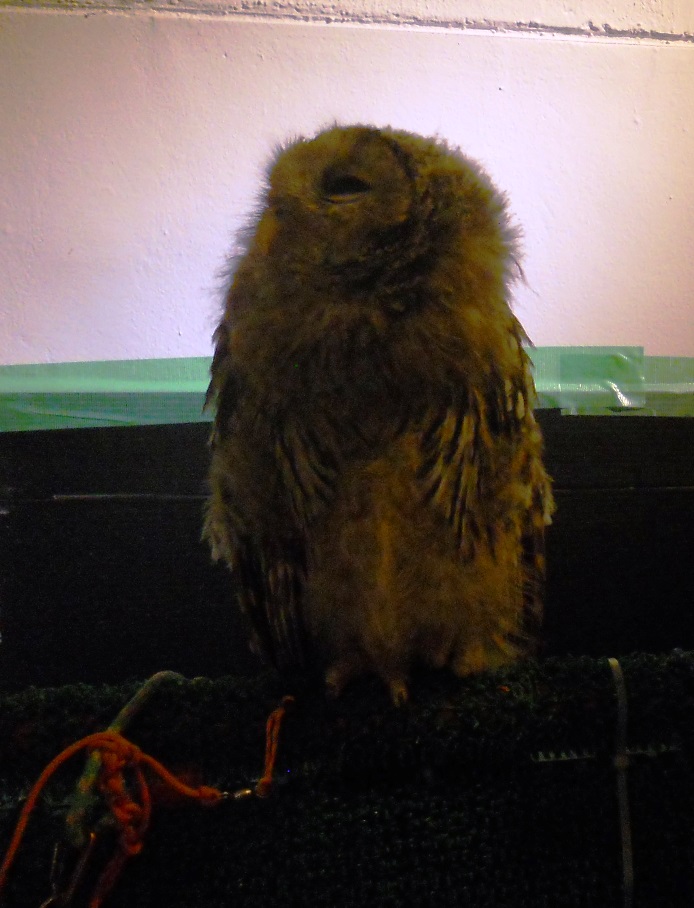 My favorite baby owl – so fluffy!

Baby owls. Nothing in the world is cuter than baby owls. After the owl cafe explanation was over, I rushed over to give the baby owls the sanctioned pat on the head. The rules said nothing about hugging the owls, but I resisted. 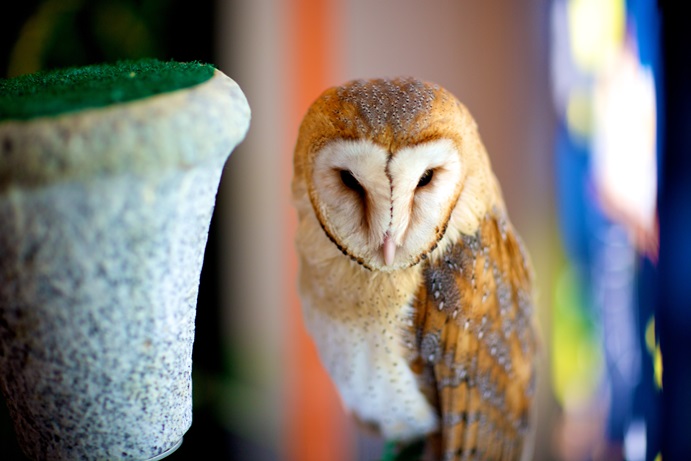 Equally as world-shattering, you are allowed to have the adult owls perch on your arm or shoulder. Great horned owls seem much larger when they are inches away from your face.

The shop’s name, “Fukuro no Mise,” means literally “The Cafe of Owls,” and the cafe had no shortage of them!

The cafe has low lighting, the perfect environment for relaxing with the owls, who were absolutely delightful and perfectly calm. According to the Nikkei article about owl cafes, the owner reportedly buys the owls from a breeder within Japan and hand-raises them himself. So, even if you’ve never been close to an owl, you can relax in knowing that they are used to people.

The hour was over before I realized it.

If you visit the owl cafe, I do recommend knowing Japanese or bringing a friend who does since all of the rules are given in Japanese. The cafe reportedly has an English rule guide and also has an English-speaker come in on Fridays.

(Check the website for details about unexpected closed days)

Reserve a spot by going to directly to the cafe. Can only make same-day reservations. Cannot make reservations by phone. 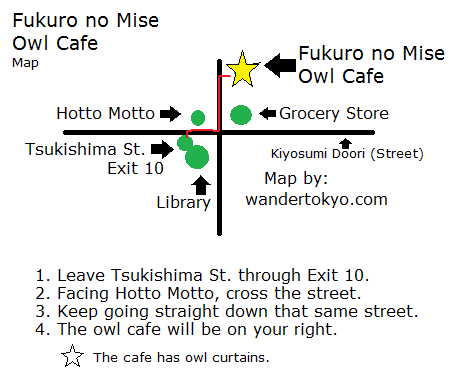 The Hawkeye Owl and Hawk Cafe Rules the Roost

Tonari no Totoro Song as Sung by Birds

Thank you so much to the incredibly talented Quentin Thompson for giving me permission to use his photos. In the owl cafe photo gallery on Quentin’s website, you can view more of his fantastic photos from the Tokyo owl cafe in Tsukishima.