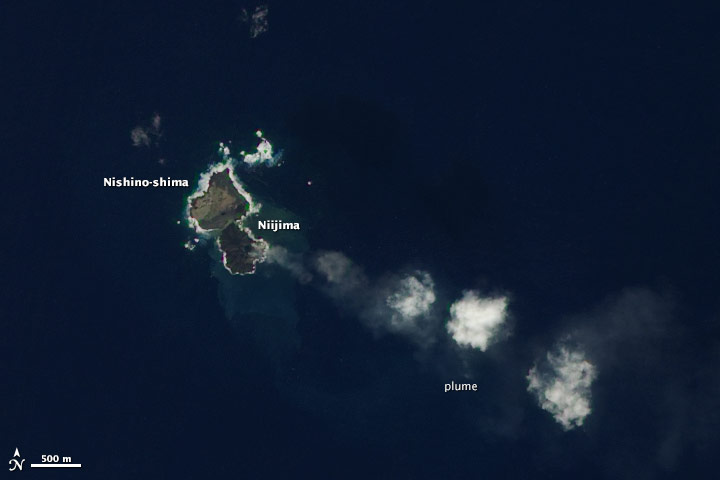 The Bonin Islands has seen some very exciting volcanic activity lately. As a result of submarine volcanoes, a new island is further changing shape and growing in the Bonin Islands (also known as the Ogasawara Islands). Since its formation was confirmed on November 20, 2013, this new island has grown about 8 times that size as of December 26, 2013.

This new Ogasawara island was confirmed on December 25, 2013, to have become connected to the nearby Nishinoshima Island. Both the new island and Nishinoshima Island are part of the Bonin islands. The islands are now connected in two places. The water in between the two connected sections has turned an orange-ish color because of the volcanic gas. At least three volcanoes in the area are erupting.

What has excited Japanese Twitter users even more, though, is the newly formed island’s shape. Many people are now calling it “Snoopy Island“!

The new island is being called “Nijima,” but many are hoping that the new island will be renamed “Snoopy Island.” Now that Nijima and Nishinoshima are connected, they have taken on a new shape: Snoopy, the lovable dog from Charles Shulz’s celebrated comic “Peanuts”.

What’s this? The new island in the the Ogasawara Islands is now connected to Nishinoshima Island!? Let’s confirm this ourselves, Mr. Gibbs. The telescope! This… our country has given birth to Snoopy Island, my good man!

ANN News/Asahi TV has produced this video about the new “Snoopy Island” in the Bonin Islands.

The smoke arising from Snoopy is a little troubling. Reminds me of the colossus giant character from the manga Return of Titan.

Snoopy island is technically part of Tokyo. At 1,000 kilometers south of Tokyo, though, it isn’t exactly close. Once the volcano has settled down, perhaps Tokyo will consider building a Peanuts museum there? Unfortunately for those who would like to live on Snoopy Island, according to the researcher F. Maeno of the University of Tokyo’s Earthquake Research Institute, it will be quite some time before people can reside on the new island. In the meantime, I’m saving up!