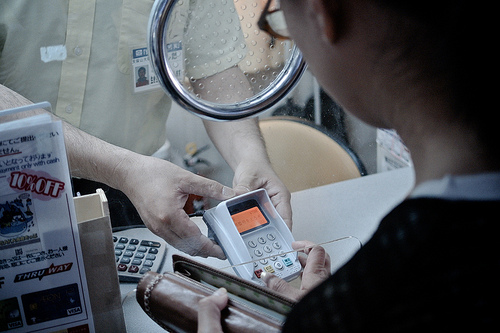 photo by MIKI Yoshihito, CC BY 2.0

…Payment is easy, and you can also earn points, which is convenient. After I applied, the card came in just a few days…

…Having to confirm employment to get the Seven Card is annoying. I’ve never had to do this with another card…

Inputting your info online is easy and went smoothly. However, I think applying at Itoyokado (department store) is probably faster… I also had someone call my place of employment to confirm.

You can get a lot of points from Seven-Eleven, Itoyokado, and Denny’s, so that’s a good deal… I think the approval process is a little difficult to pass, though.

If you’re shopping somewhere other than Lawson, you should use another card to earn the most points possible.

When you earn points, you can use 1 point as 1 yen and can also exchange points for products, so it can be a great deal. It’s also great that there are lots of cooperating stores.

…When I called to ask a question, the help desk wasn’t very polite, but I really like the card…

If you have a Ponta card, I recommend exchanging it for the Ponta Credit Card… Just by going to the store, you get points!

…I sometimes go to Seiyu Group stores (owned by Walmart). Normally, you get 1% off of purchases there, and there are also 5% off days too, so it’s not a bad idea to have this card…

Except for being an American Express card that doesn’t have a yearly fee, there’s not much else special about this card…

I needed a credit card, so I made a Viaso Card. The application was all online, so it didn’t take much effort. I was told there would be an approval process, but they didn’t call my work. The credit card was issued quickly, so I’m really thankful.

…I recommend this card because there is no yearly fee. Also, the points added up faster than I thought they would.

The Recruit Card has the best return on points, so I was thinking of applying, but those points can only be used for Recruit services, so I decided not to apply.

The Recuit Card is a really great deal for people who use Recruit sites (HotPepper, Jaran, Ponpare, etc.)!

If you have the chance to shop often at Aeon, having this card is a good deal… The points carry over every year, so that makes it even better.

It takes too much time for them to get back to you about your application. For me, it took over five weeks…

I sent my application in the middle of January, but even though they didn’t contact me at all after that, the card itself came in the mail!?

I had been using Aeon Selected Card for only two months when I made a phone call to increase my credit limit. A 100,000 yen increase was granted! The call center is very professional (without being too business-like) and left me feeling good after having called them. Anyone who has this card should call to talk to them directly about anything.

Which card are you thinking about getting?

If you have a Japanese credit card, what do you think of it?