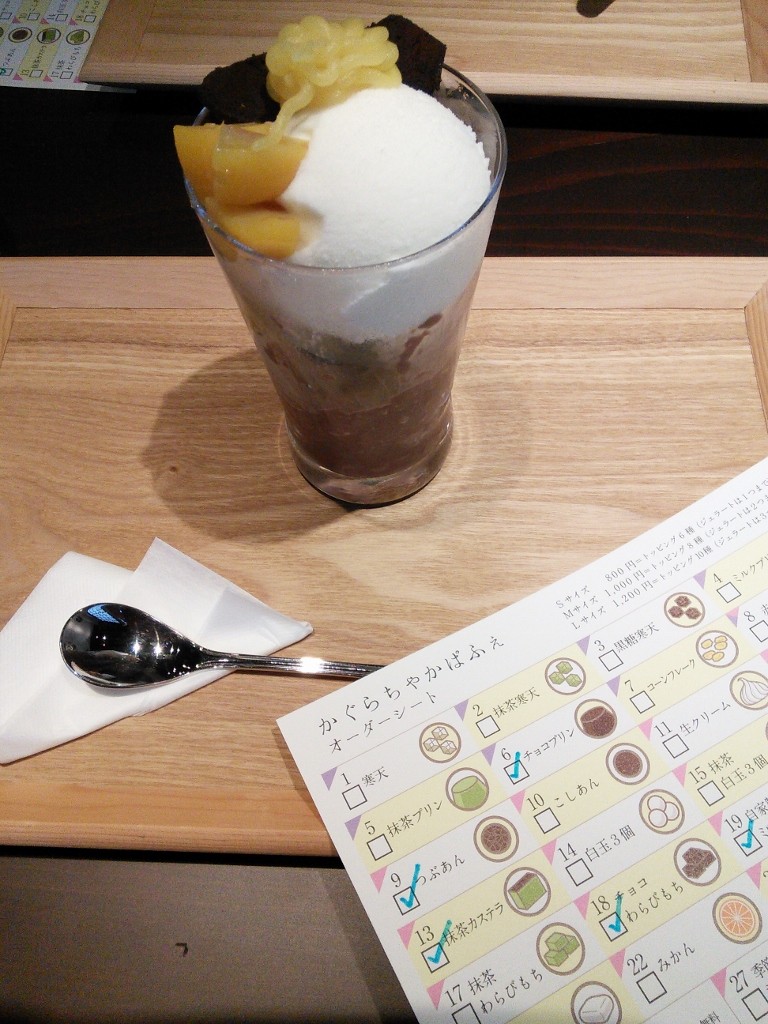 Upon landing in Japan, you’ll find that matcha-flavored items abound. This traditional Japanese green tea has made it’s way into everything from cakes to KitKats to parfaits.

Ever since coming to Japan, I’ve been trying to make up for lost time by eating as many matcha-flavored items as possible. My friend, knowing this, invited me to a newly opened matcha parfait cafe called Kagurachaka, located near Iidabashi and Kagurazaka in Tokyo.

Kagurachaka, which opened July 8, 2015, is down a side street in right off the main shopping street of Kagurazaka. We arrived at the matcha parfait cafe before noon on a Sunday and only had to wait about 10 minutes for a seat. Coming in the morning was a good idea, as the cafe looked much more crowded when we walked past it after lunch. The first floor of the cafe has the bar and cash register, and the main seating was on the second floor, which has about seven tables. Kagurazaka is a relatively small cafe, featuring a lot of dark wood, but its windows let in plenty of light.

The matcha parfait cafe serves light foods in addition to parfaits, but we went straight for the parfaits. The parfait ordering system is unique. 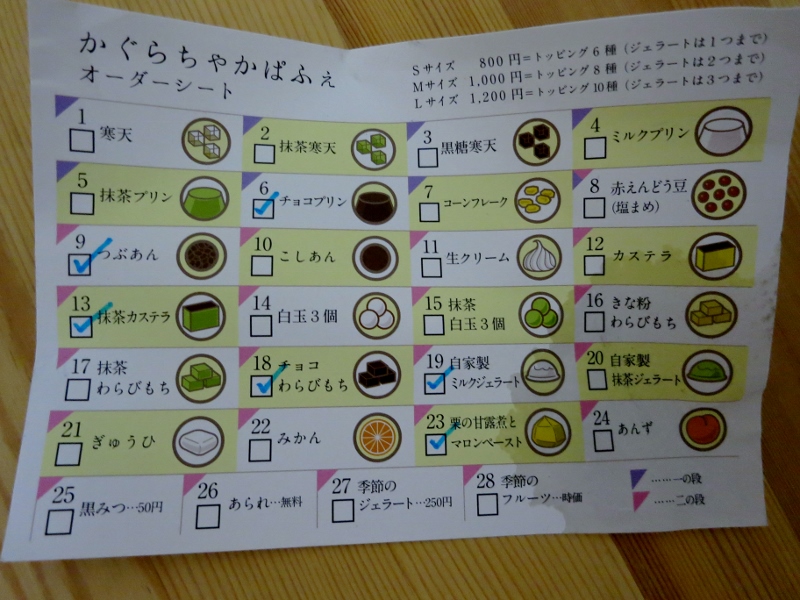 The menu has the names and pictures of all the toppings and you put a check mark next to the toppings that you want. The small (800 yen) gives you 6 toppings, the medium (1,000 yen) has 8 toppings, and the large (1,200 yen) has 10 toppings. The toppings themselves include items such as milk pudding, whipped cream, red bean paste, orange slices, chestnut cream, corn flakes, and of course, lots of matcha – matcha icecream, matcha pudding, matcha mochi, and so on.

I really enjoyed the parfait itself, which allows for a mix of tons of traditionally Japanese sweets, as well as the umeboshi (pickled plum) before the parfait. One thing to keep in mind is that the umeboshi should be eaten little by little in between bites of the parfait as a palate cleanser, much like pickled ginger and sushi. I didn’t know this and my parfait partner laughed at me when,he saw that I ate the umeboshi all in one go before the parfait even came.

I do highly recommend that you visit Kagurachaka. The cafe has a cute concept, delicious parfaits and is in an interesting part of Tokyo.

Have visited Kagurachaka or had a matcha parfait?

Isuta Post About Kagurachaka [in Japanese, but lots of photos]