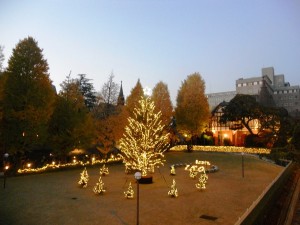 The first Sunday in December is the day that students of the Japanese language around the world gather to take the Japanese Language Proficiency Test (JLPT). This year, as well as last year, I was among their ranks. I’m not very good with calculating time differences, but I suspect that at least half the world has finished up taking the test. In any case, I’d like to recount my experience with the 2013 JLPT.

Last year, I failed the December 2012 JLPT at the N1 level by a few points, so I was feeling pretty confident about this year. At the same time, I’d gone through a move to Tokyo, some pretty nasty sicknesses, super long work trips, and various travel during the holidays. Needless to stay, my study habits took a hit. Last year I said I’d lay out a strategy for making the grade for the N1 on the JLPT, but I never got around to it. This year, I’d like to make good on that promise to myself. Regardless of whether I pass this year, I’m going to try taking the test again in June 2014. We won’t get the results of the December 2013 JLPT until the end of January 2014, so I need to get a head start on studying. Anyway, this post is meant to be about my thoughts on the test, so here we go.

Getting to the JLPT Test Site

So, I got lost on my way to the test site. About three times. Tokyo trains are confusing, okay? I finally arrived with about an hour before the JLPT test rooms opened. So I studied a bit, ate an onigiri, and thought about what I’d like to do for my birthday (go to a bird cafe). I noticed that only people who were taking the JLPT N1 were at the test site. Apparently in Tokyo, the levels are divided up and sent to different campuses.

The language knowledge section went basically the same as last year. I didn’t have much of a chance with the vocabulary and kanji section. I haven’t actively studied vocabulary for about a year, which was really foolish on my part, especially since I was preparing for the JLPT. Also, I’ve been slacking off as far as kanji writing and memorizing, which is tied up with vocabulary.

The scrambled sentences weren’t too challenging. I do a lot of reading in Japanese, so I have a feel for where things should fit, even if I don’t fully understand the meaning. I’d also studied grammar much more than I did vocabulary. I think knowing Japanese grammar helps more on the scrambled sentence part of the JLPT.

The grammar section too was a little kinder. I’d been using the Nihongo Nouryoku Shiken N1 Bunpou Taisaku Hyoujun Tekisuto (Advanced Grammar Book for the New JLPT Level 1 by Shuwa System), which, although a little boring, has a lot of information. Plus, a lot of the N1 grammar is easy to figure out if you break it down.

I was looking forward to the reading section, since I love reading in both English and Japanese. As usual, the JLPT N1 reading section for 2013 included a lot of opinion pieces.

The JLPT for N1 has conversations at everyday speed, with a couple twists and turns. The voice actors for the most part have standard accents. For me, the vocabulary is what threw me off (I see a common theme here). Living in Japan has helped me get used to the speed of spoken Japanese, and like I mentioned earlier, I’d done some grammar studying.

All in all, I think I will get a lower score this time than last time.

I’m going to study a lot in the next few months and will be adding my study plan and some of my study materials to this site.

Let us know what you thought of the December 2013 JLPT!

Reflections on the December 2012 JLPT