Please bear in mind that this is far from a complete, objective post describing the entire city of Tokyo following the earthquake and subsequent tsunami that devastated prefectures farther north. I’ve been here for less than a week and, as I arrived on March 16th, it has been a few days since the tragic events. Also, I’ve only been within a few mile radius of Asakusa, so I can hardly speak for the rest of the Tokyo area. However, I’d like to offer what I’ve seen and answer questions that have been asked of me.

The news has made it seem like chaos in Tokyo, but, at least in the Asakusa area, there seems to be no obvious panic. People are walking the streets and cars are driving the roads, although I can offer no assessment as to whether the foot and vehicle traffic is at normal levels. Schools are in session, and there seems to be little to no structural damage that I can see. I’m aware that several parts of Tokyo have had blackouts because of power shortages, but I have not experienced it in this area. This is not to say that everything is “business as usual.” In fact, quite a few establishments have closed temporarily or limited their hours, mostly in order to save energy. 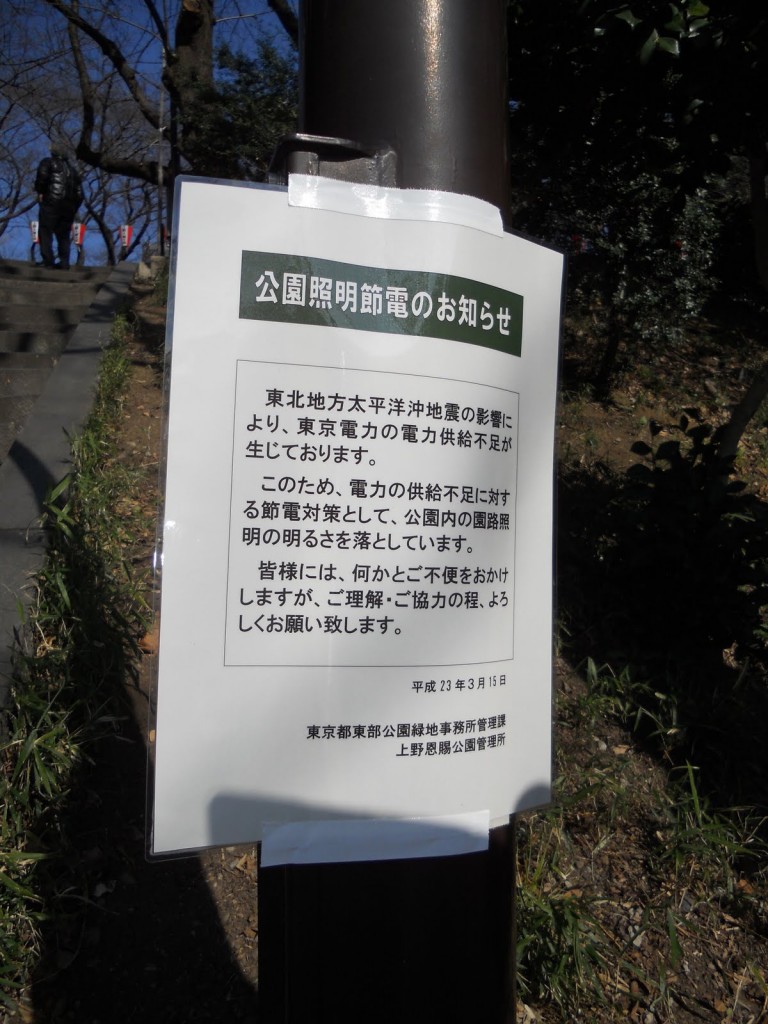 Also, while food is still plentiful, convenience stores have signs apologizing for the lack of selection, some supermarkets completely lack a few of the cheaper staples, such as noodles and eggs, and, in the beverages aisles, grocery stores have put up signs limiting mineral water to 2 bottles per person. On the subject of shortages, I did not see any huge lines for gasoline, but this is probably because nearly every gas station I passed was temporary closed.

As mentioned before, there are still people outside, but I noticed that up to half were wearing cotton masks. This is not an uncommon practice, and last time I was in Japan, many people wore them to prevent the spread of swine flu (in fact, many grocery stores had sold out of masks!), but this time, the reason for wearing the masks is more likely because of the events in Fukushima.

*correction: A friend told me that many people wear masks in Tokyo around March/April because of hay fever; I jumped to conclusions. Sorry!

Naturally, many of the conversations around me are about the earthquake.

These are my current observations. Please do not think that this necessarily applies to all of Tokyo or even most of Asakusa, and keep in mind that I arrived a few days after the initial events. Again, my thoughts go to those directly affected.

In relation, I’d like to share this blog, which is written by a friend about his experiences:

This was originally published on my old Blogger on March 19, 2011.