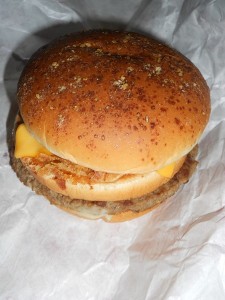 When I came back from the States, I was greeted by more of America.

Japanese McDonald’s version of America, that is.

I saw the sign almost as soon as I stepped off the plane:

A few days ago, I finally tried it.  The newest burger in the Big America Series at McDonald’s in Japan.

This is what the official McDonald’s website has to say about it:

The distinctive Grand Canyon Burger is filled with beef patty and steak patty. The Grand Canyon is a World Heritage Site in the western U.S., and the Grand Canyon Burger conjures images of the three-layer rock-face using three buns and the color differences in the layers with two types of cheese (cheddar cheese and mozzarella). The Grand Canyon Burger packs a punch, towering with egg and beef patties.  The steak sauce is the clincher, combining with the texture and flavor of onions, soy sauce, and smokey flavoring, making it a burger with a steak flavor that all Japanese will love.

Now, my take on the burger:

First, on top, a bun, maybe whole wheat, but probably not, with many crumblies, which do not appear to be sesame.

Then egg.  Sort of like a short cylinder egg slab.

Next, maybe some ketchup, but I’m not sure.

I got through half the burger, and then I found that the second layer also had relish.  I hate pickles.  I think only half of the burger got relish on it though.  How strange.

Next, some sort of onion-straw things.

Under that, a cheese of some sort.  Probably America.  This is part of the Big America Series of burgers, after all.

After that, another bun.  Sort of a flattish one this time, to make the burger more symmetrical or something.

Next, some sort of sauce.  Unlike the Idaho Burger, I rather liked this sauce.  It was reminiscent of sweet-and-sour sauce a bit.

After that, a lighter cheese.  It reminded me of swiss, although I’m sure it was something else.

So, in conclusion, although I can’t say it really made me think of the Grand Canyon (not that I’ve ever been to it, sigh), I did really like this burger.  Next time, if I ever get it (limited time!), I’ll definitely ask for no relish.  That stuff is awful, and I thought I escaped it when I came to Japan.  Although the burger is a little like a “Cheesy Western,” famous at a truck-stop in my JHS and HS town, it is its own entity.

You can also catch the commercial for the Japanese McDonald’s Grand Canyon Burger.