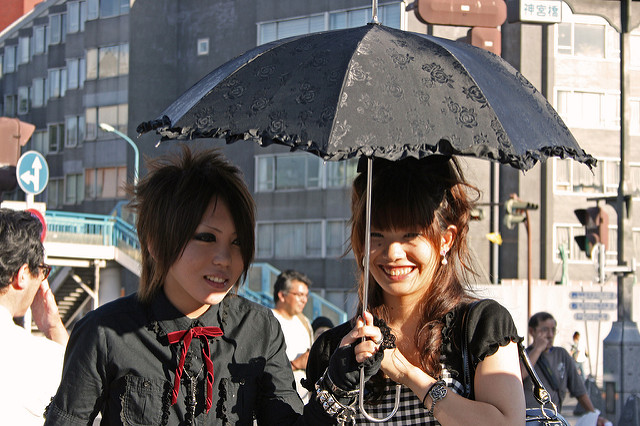 Thank you to LinguaLift for this guest post on gothic lolita in Tokyo by the cofounder Philip Seifi!

As must always be addressed when talking about lolita fashion, despite the name there are no further connections to Vladimir Nabokov’s novel of the name title—a fact that many lolita devotees are keen to impress on any outsider.

While the lolita aesthetic began as far back as the late 1970s, with pretty and feminine styles, it was in the 1990s at the height of the visual kei music craze that gothic lolita came to the forefront.

Malice Mizer bandmember Mana is credited with being instrumental in the development of gothic lolita fashion and almost single-handedly creating legions of fans desperate to follow their cross-dressing idol in his modes of antiquated and dark dress—everything from blue lipstick to high platform mary-jane shoes.

Coining the phrases ‘elegant gothic lolita’ and ‘elegant gothic aristocrat’ for his clothing brand Moi-meme-Moitie, in the Gothic and Lolita Bible (ゴシック & ロリータバイブル, a quarterly publication dedication to all things fashionable and frilled), Mana says of his lolita lifestyle, “my idea of gothic lolita, disregarding popular opinion, is that those who have a mysterious outlook on the world will eternally like it… I don’t think I became gothic lolita, it was simply natural for me.”

So, what makes a gothic lolita? Although there is much in common here with goth fashion culture worldwide, it must be noted that all goths are not lolita, and all lolitas are not goths. Typical of a lolita outfit is the bell-shaped skirt that gives the outfit a defined silhouette, blouses with frill and lace details and complimentary accessories such as hair bows and patterned high socks.

Deviating from it’s less morbid sisters, gothic lolita fashion also brings in a wide range of influences including traditional gothic imagery and religious iconography, while keeping an eye firmly on the high quality details that make lolita fashion so distinctive.

Although lolita fashion draws inspiration from a diverse range of sources such as Rococo finery and Victorian symbolism, it has as many sub-styles as you’d expect from such a fashion-conscious fan base, with diverse brands to match—popular lolita fashion brands include Baby the Stars Shine Bright, Victorian Maiden and Angelic Pretty.

What do you think of gothic lolita fashion? Is it a style you would wear, or should it stay on the streets of Tōkyō?

Philip Seifi (seifip@gmail.com) is the Co-Founder of LinguaLift, an online language school where learners enjoy the flexibility of a self-taught curriculum with the guidance of helpful study coaches. Read his complete language learning guide to get a head start.