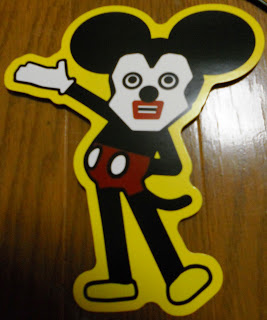 Cubic Mouth Disney named so because it features Disney characters with cube-shaped mouths.

With a brief search I was unable to find anything of detail on WHY their mouths are shaped like this. Apparently it’s in the style of predecessors such as Fuel-Efficiency Girl Heidi and The World of GOLDEN EGGS. Both were created by Studio Crocodile. The latter, The World of GOLDEN EGGS, seems to be a comedy variety animation show.

The former, Fuel-Efficiency Girl Heidi, came after the show and is an animation created to advertise for the Nissan Note. The character and show itself were based on a literary character from the novel Heidi’s Years of Wandering and Learning. The original Heidi did not have a cubic mouth, as far as I know. Then again, I’ve never read the novel, so I don’t know for sure.

Here’s one of the Cubic Mouth Heidi commercials, which features the characters repeating, “Teinenpi,” meaning “low fuel consumption,” over and over to the Mortal Combat Theme. I should probably warn you that it’s a little loud at the beginning.

Anyway, no closer to the answer as to why Cubic Mouth characters’ mouths are shaped like that, besides perhaps style, I leave you. Well, I will also leave you with a Cubic Mouth Disney video. This YouTuber uploaded a video of a Cubic Mouth Mickey bath ball. Enjoy!

This post originally appeared on my old blog on June 5, 2011