Just as I was surprised that there were 7-11s in Japan, some of my Japanese friends and acquaintances were surprised to hear that there are 7-11s in America. Although many Americans seem to have a low opinion of 7-11 (at least 7-11 in the US), I actually hold a bit of a fondness for it. This fondness may stem from good memories of frequent visits to 7-11 with friends, since I used to live right behind one in the US and right across from one when studying abroad a while ago in Japan.

It is true, though, that in Japanese 7-11s there’s a slightly larger selection of ready-to-eat food than in the US. This is one of the many offerings from Japan’s 7-11: 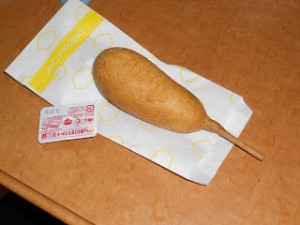 You may be thinking,

“Wow! This must be some sort of bread-coated octopus sausage, or else she wouldn’t be taking pictures of it.”

This is a corn dog, much like any other. The reason for the picture is what the corn dog is labeled as in 7-11: “big American dog.” I’m noticing a trend in the adjective used in naming food items labeled “American.” I do suppose the corn dog is quintessentially America, though. Further, I probably wouldn’t buy something called a “corn dog” in Japan, as it would probably have actual kernels of corn in it.

I swear the cashier laughed at me when I ordered one.